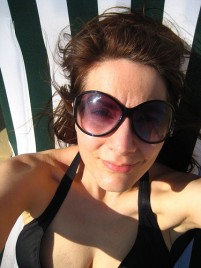 (Picture: On Camber Sands, sticking my head through one of those saucy seaside cutout thingees)

1. I have been tweeting a lot. Here. Graham Linehan describes why Twitter has captured my heart here. Janet Street-Porter annoys me here. As I realised (after my initial scepticism), there must be something in Twitter, given the many funny, interesting and erudite people using it. In fact, JS-P’s point that “teenagers have already sussed Twitter is crap and aren’t taking it up” struck me as rather strange logic – because surely the fact that Twitter has been abandoned by teenagers means there really must be something in it? Namely, that it’s full of funny, interesting and erudite people? Yes, some twitterers describe the sandwich they’re eating. But most twitterers don’t, or they describe the sandwich they’re eating in an amusing way.

2. I have been writing songs like a songwriting demon. Thanks to My New Notebook, which helps to make any rush hour Tube journey in London bearable, music and lyrics have been pouring out of me. At one point this week, I was worried that my lyrics were far too obvious, that I express my emotions far too obviously… But then James Taylor came on my iPod, singing – nay, instructing me to – “Shower the people you love with love/Show them the way that you feel”. Which struck me as both a) an example of a very obviously expressed emotion, and b) a call to arms to express one’s emotions in an obvious way. Thanks, JT!

3. I had my summer holiday, ie. two nights in East Sussex. I crave two weeks lying by a pool in the Med so much that it is practically a physical ache, but the life of a poor musician/freelancer means that you can’t take time off without losing money – as well as spending it – so that Greek/Italian/Balearic idyll will just have to wait til some other time. In the meantime, here are the photos from East Sussex. Camber Sands was lovely – although surprisingly busier on a Saturday in August than it was on a Tuesday afternoon in February, which was when I first fell in love with it – and Rye was so twee that I almost vomited up my cream tea. Oops! I did get to swim in the sea, though. And make my wrist ache using a mallet to hammer in a windbreak. Which, when you put those two things together, surely constitutes an ‘activity holiday’.

4. Music-loving-wise: I bought tickets this week to see Joan As Policewoman and Richard Hawley, who are both playing London in October. Current favourite song being played on loop is ‘You And I’, off the new Wilco album (and featuring the wonderful Feist); new favourite album is Johnny Cash At Folsom Prison; new old-song-suddenly-remembered-and-rediscovered is ‘LA County’ by Lyle Lovett;  and favourite song on MySpace for the past few months and continuing to remain so today is Bob Schneider’s 40 Dogs (Like Romeo And Juliet). Joyous, optimistic, funny, romantic and adorable, and as hooky as something the Trotters would sell you. Maaahvellous.

5. I am now wearing my hair in a centre-parting. And when I say that, please imagine Penelope Cruz or Alexa Chung as opposed to Wednesday Addams or Neil from The Young Ones. Because clearly I am channelling old-school glamour/sexy rock chick as opposed to goth/hippy. I hope.

Anyway, that’s about it for now. Hope all’s good with you out there.  If you want to know what I’m up to on a more regular basis, you know where to find me. Sorry, Facebook. It was never going to work…