A massive thank you to everyone who came down to my album launch gig at the Spice Of Life in London last night. Friends, strangers, old colleagues, young colleagues… It was a packed house and it was so wonderful to see you all. I’m truly humbled that you came out to support me.

Here I was in my ’80s outfit (silver stilettos just out of shot), probably crooning about something emotional: 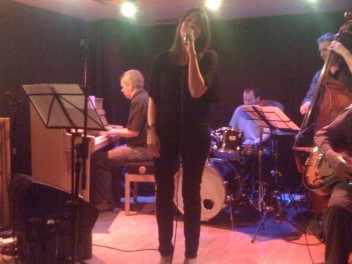 The band (the trio on the album – pianist Martin Pickett, bassist Paul Jefferies and drummer Ben Twyford – plus guitarist Dave Cliff) sounded wonderful. Especially when you consider that Dave only has one arm and leg and no head, and Paul has no left elbow. It’s amazing what these jazz players can do!

Intro – Welcome to The Spice of Life
(not an Indian restaurant, actually a jazz club)

A Nightingale Sang In Berkley Square

So, it’s about time I wrote a proper blog post, no? I mean, of the sort one might expect on an Artiste’s website. It’s easy to forget one’s an Artiste. Especially when you’re eating tuna out of a can.

But I digress. Because, yes, a proper Artiste’s website blog would let you into my most innermost thoughts and musings on my music, and update you on all the latest goings-on in my career. Well, here you go, then:

The other night, I ate tuna out of a can.

I jest! I am, apart from that, doing lots of prep for my album launch gig on Wednesday; I’ve found out that Photograph is going to be reviewed in the next edition of Musician magazine; and I broke my camera. And my iPod. Oh yes, it’s all been happening!

But the most exciting music news is that I’ve had more CD orders from Japan – and have made it onto the front page of the ‘Jazz’ sections on both HMV and Tower Record‘s websites. In Tower, I am under ‘New Releases’, and therefore Herbie Hancock (unfortunately screengrab restrictions meant I had to cut my picture off. But the main thing, clearly, is that Grant Green and Herbie Hancock’s listings are visible at the top):

On HMV’s site, meanwhile, I’ve made it sufficiently high enough in their charts to place me under Melody Gardot (and, a little further up the page, Diana Krall): 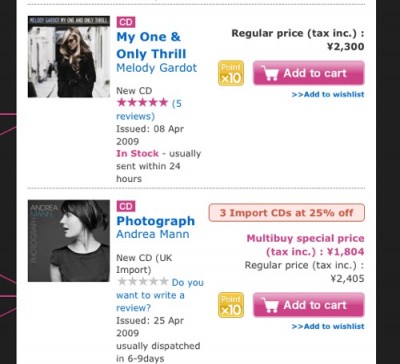 Both of the above make me clap my hands in excitement, like a small girl who’s just been given a puppy. Although, y’know, screw puppies, they just get old and stop being cute. Album sales never stop being cute.

And it gets better! Because while HMV has an English version of its Japanese site, Tower Records doesn’t. So I copied and pasted my album’s description by Tower Records Japan into Babelfish, and here’s the translation: 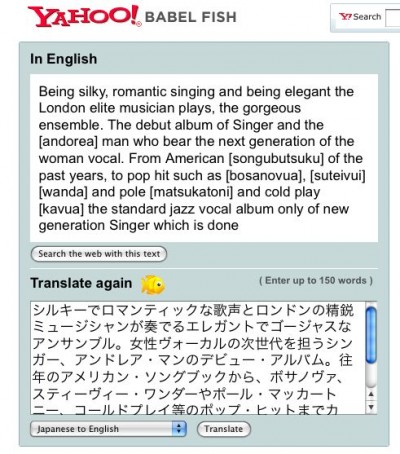 I don’t think I can top that.

So: a big thank you to my Japanese guru Josh (not actually a ‘guru’, more a ‘promoter’), to the kind people at Tower Records and HMV, and most of all to everyone in Japan who is buying the album. And here’s my way of giving thanks (or: saying ?????. Unless Babelfish got that wrong and I actually just said ‘You give the me thanking to’. How embarrassing!) :

(Oh, and PS – the iPod Night was a rip-roaring success, and the next one will be on June 10th. Watch this space blog!)

*Update* A new thought: were Alphaville actually big in Japan before this single? Or did they record it and *then* become big in Japan? Answers on a Hello Kitty postcard!

3. While You See A Chance – Steve Winwood

Those of you who know me will know that I’m actually drawn more to singer-songwriter fare (James Taylor, Paul Simon and Bruce Springsteen being my favourites) than the above Playlist would imply. But clearly, it’s the first iPod Night, I’m one of the hosts, it’s going to be in a bar, and I’m in a party mood.  As a result, I’ve picked Four Of The Tracks Most Likely To Put A Big Silly Smile On My Face. And even that was very, very hard to whittle down.

Suggestions welcome for the theme of the next iPod Night. Tracks Most Likely To Put A Big Silly Smile On *Your* Face, perhaps?

My personal showbiz chum Josh and I are hosting our very first iPod Night at the East Dulwich Tavern tomorrow night: 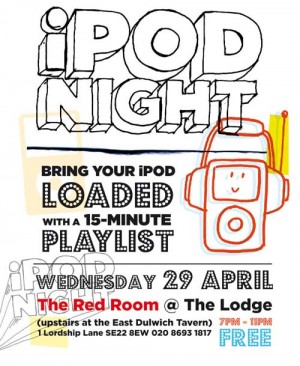 As you can see, all you need to do is bring your iPod loaded with a 15-minute Playlist or, alternatively, a smiley face.

If you live south of the river (Thames, not Potomac), then please do come down, because it promises to be a really fun night. Especially when I play Steve Winwood.

(Hat-tip to Matt Burke for the fabulous flyer)

Be there or be square! That’s right. Because square people don’t like jazz. 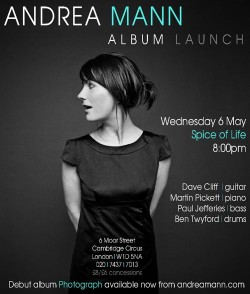 There’s the flyer, just in case you haven’t seen enough of that photo yet ;-).

So, yes: I am launching the album in London proper, like, with a gig at The Spice Of Life – a wonderful cellar-stylee venue in Soho – on Wednesday 6 May.

The band will be Dave Cliff (guitar), Martin Pickett (piano), Paul Jefferies (bass) and Ben Twyford (drums). We’ll be doing songs from the album, plus others – so expect a night of fab live jazz, bossa nova and chatting. Yes, I even chat live. Ta-dah!