You are here: Home / Blog / Sheffield and Oxford – I hardly knew ya!

Thank you to everyone who came along to my gigs at Jazz @ The Picture House in Sheffield last Monday, and at the Oxford Jazz Festival on Friday. Both were a blast, and I’m enormously touched by so many people turning out for me. Especially when it’s a Monday/it’s raining. You people are saints. Saints, I tell you. 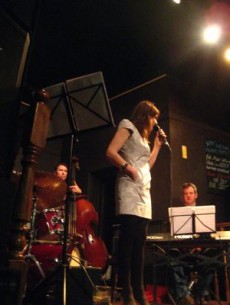 Here I am in on stage in Sheffield, looking not unlike Ginormica in Monsters Vs Aliens.  And yes, that’s my Pocketed Launch Gig Frock I’m wearing – the same one I wore at Oxford. (And to anyone who sees any photographic evidence of that performance, I would just like to point out in my defence that I’m going through a particularly bad time right now, ie. growing out my fringe.)

But enough of the frocks and hair –  hopefully everyone enjoyed the music, too. Because that’s what it’s all about, right? Well, that and the between-song chatter… which is all a bit of a blur, although I do remember producing a compass at one point, and insulting Jacqueline Du Pré. Did that really happen? Oops!