You are here: Home / Blog / Susan Boyle: A theory 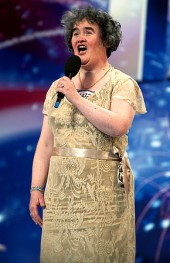 I have a theory* about Susan Boyle, the woman who may or may not be crowned Britain’s Most Talented Person tonight.

And no, this theory isn’t about Susan’s sudden rise to fame, or her personality, or her back story. (But since you ask: no one would have made such a “But she sounds so different from what we expected!”-style fuss if she was a man who was less than conventionally beautiful. But I digress.)

No, what I want to talk about is Susan Boyle’s voice – and my theory as to why it’s made such an impression on us, and inspired so many people’s devotion, including my own.

And this is what it is, this theory of mine*:

The reason that Susan Boyle’s singing voice has made such an impact – regardless of her looks – is that she sings in a style that nobody sings in anymore.

To wit – listen to her version of I Dreamed A Dream, the performance which made her famous (unfortunately, ITV have clearly clamped down on everyone and you can’t embed this video – only link to it).

Now, these days, there are pretty much three styles of singing – in the sense that popular/successful singers in the West inevitably sing in one of the following three ways:

But Susan Boyle? Susan Boyle doesn’t sing in any of those three ways. And it struck me when I heard her version of Cry Me A River exactly what her style is. *Drumroll*.

Susan’s style is MGM Musical. She sings like one of the actresses from that era. Her voice isn’t a belt-it-out, stage-musical voice like that of, say, her hero Elaine Paige. And yet it also isn’t classical. And it certainly isn’t Whitney Houston, either. No, Susan’s is the voice of the likes of Julie Andrews and Mitzi Gaynor and Marni Nixon (who voiced Audrey Hepburn and Natalie Wood’s singing voices in My Fair Lady and West Side Story respectively). It’s warm and unforced and not vibrato-tastically classical; it’s easy-on-the-ear, accessible and lacking any sort of pomposity; it’s as unaffected and unreceived and full of personality as Susan herself. And it’s utterly reminiscent of a different time.

In short: Susan Boyle’s voice is old-school. It is, in itself, a beautiful way of singing – but more than that, it’s the kind of voice we simply never hear these days. And that’s why Susan Boyle’s singing has captured our hearts.

And that is the end of my theory.

*See below. Because I find it impossible to say “I have a theory” about anything without thinking of John Cleese in this Monty Python sketch: