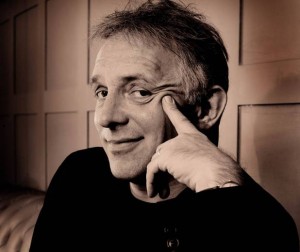 I was a languages student, and on my year abroad, studying in Brussels. I heard from another British student at our college that Rik was in town, filming The New Statesman (Alan B’Stard had become an MEP). “They’re going to be at the Atomium tomorrow,” he told me.

Now, I don’t bunk off classes lightly, dear reader. But even I realised that an amazing opportunity was presenting itself. Hanging around a stage door surrounded by loads of other fans? You’d never get to properly meet your comedy hero that way. But journeying to the outskirts of a foreign city on a Wednesday? I was probably in with a good chance. Not least because it was winter, too. A midweek day in November was not going to be the Atomium’s biggest day for ticket sales, I imagined.

I was right. The following, rainy, day I found myself sitting in the reception area at the base of Brussels’ structure of silver and balls, and the only other people in the place were the film crew from The New Statesman, standing around, chatting between takes. And there among them was Rik: wearing a see-through plastic cap on his head, like an old lady, to protect his Alan B’Stard hair from the elements.

I sat and watched, too shy to approach. And then he saw me.

Before I could think, I was doing the international sign language sign for ‘Can I have your autograph, please?’ (it’s not unlike the one you use when you ask a waiter for the bill, only you flourish the pen-holding fingers a bit more). Rik nodded and winked at me with a ‘give me a second’ gesture.

And sure enough, moments later he came over with a “Well, hello!” and plonked himself next to me. I explained (no doubt extremely quickly, because I so nervous and excited) who I was, and how I was such a huge fan, that I had written to him before but could I maybe have his autograph again – and produced the paper and pen that I had brought. He went to sign his name… and the pen didn’t work. I was mortified, but Rik had it in hand. “A pen! A pen! I need a pen!” he shouted, clicking his fingers theatrically. And swiftly, a crew member brought him one – by doing a power slide up to us, brandishing the pen aloft.

Rik was ridiculously charming, funny and generous – and clearly loved by the crew around him. He was also, I was embarrassed but delighted to learn, flirtatious. After the chat and the autograph, one of the crew took our photo together: I put my arm around Rik, he put his hand on my bottom. But it wasn’t, I hasten to add, the slightest bit creepy or slimey. It was funny, and brilliant. Clearly, this man wasn’t making a play for me – he was just absolutely making my day.

It was, in short, pretty much the most perfect meeting-of-a-hero you could wish for.

As a child, you can tell a performer is special, but you don’t know – or can’t articulate – why. You just feel it. They move you, they blow you away, and in the case of a comedy actor, they make you laugh more than anyone else on screen. As an adult, you can maybe start to pinpoint what it is that creates that magic.

Meeting Rik, I realised that part of this magic is that he appeared to be utterly congruent. He was clearly a natural performer but not arrogant. A natural charmer who had the confidence to simply be himself. And he was also a good-looking man who – as is the case with all great comedians – was never afraid to make himself look ugly.

Indeed, rewatching clips of his performances, I’m struck again by how he was that rarest type of comedy performer: one who is equally brilliant at both verbal and physical humour (a trait he shares with that other comic genius Rowan Atkinson). Rik was a master of timing and delivery, whether that was using words or his body – and when it comes to the latter, I don’t just mean the violent slapstick of Bottom and The Dangerous Brothers. It’s there in the way he flicked the Vs or snorted as Rick, the way he animatedly used his hands while sitting in his Kevin Turvey chair, the way he grabbed ‘Bob’ and went in for the kill as Flashheart. And when it comes to the former: well, I don’t believe that any of Rik’s lines would have been quite so memorable or quite so quotable if they had been delivered by anyone else. And I certainly don’t think my sister and I (and Michael Sheen) would have been able to do such good impressions of him.

Goodbye Rik, you utter, utter, UTTER hero. I’m glad I got the chance to tell you how wonderful you were – and not just when I was only 12.