You are here: Home / Blog / Cool Runnings
Because this post is about ’80s music, I was initially going to call it ‘Not-So Cool Runnings’. But if there’s one thing that outweighs my love of wordplay, it’s my dislike of the notion of guilty pleasures. So here I am, pinning my neon colours to the mast: this post is about ’80s music, and running, and running to ’80s music, so I’m calling it ‘Cool Runnings’ as loudly and proudly as I would sing along to Starmaker from The Kids From Fame, as long as nobody else was in the house.

Yes, yesterday I kicked off my run with the favourite Go West song from my childhood. Not for me, King Of Wishful Thinking. Not for me, even, We Close Our Eyes. No, Call Me has always been my go-to Go West song. I remember coveting the band’s debut album, which featured it – turning the cover over and over in my hands, studying every detail, from the snowflakes falling on Peter West’s prettily handsome face on the front (there was some other guy on it too, but, whatever) to the black-and-white sketches on the back. 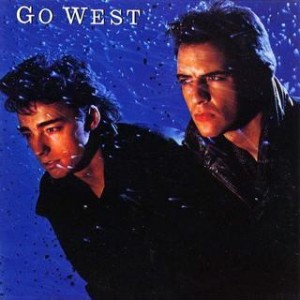 I was 14 when that album came out – and some of my happiest memories of those mid-teenage years are of getting on my bike and cycling along the disused railway line that ran out of our village and through the Staffordshire countryside.

The feeling of joy and escape this gave me was powerful. I was at my happiest, in many ways, out on my bike in the countryside like that – not least because I would usually be listening to my favourite music on my Walkman (or rather, my Tandy equivalent) as I cycled. It may be true that in space, no one can hear you scream. It may also be true that on the Wombourne railway walk, no one can hear you sing along to Owen Paul’s ‘My Favourite Waste Of Time’. Either way, I wasn’t chancing it – I mimed along instead.

Which is something I occasionally find myself doing on my runs now, as an adult. I ended my happy 5k run yesterday lipsynching to Sledgehammer by Peter Gabriel, in fact – and I wouldn’t be surprised if that’s another reason why I had such a successful run (by my standards). I was happy that I’d managed to keep running that far, so I did the closest thing I could to singing; doing the closest thing I could to singing made me happy, so I managed to keep running.

Indeed, now that I’m thinking about it, ‘going for a run’ is, of course, an adult equivalent of ‘going out on your bike’ (and a special tip of the hat to all you adults for whom the adult equivalent of ‘going out on your bike’ is actually going out on your bike). And I’m sure Julia Cameron would approve of it. I’m reading her book The Artist’s Way at the moment, and a big part of the ‘course’ is uncovering what you loved doing – what made you feel the most you – when you were a child, and reconnecting with it. I may not have been on a bike yesterday, but I was using my body to zoom through the world with music in my ears – the music which made me so happy as a kid – so I guess it’s no wonder that I felt some of the joy I felt as a 14 year-old.

So now I’ve made a playlist of ’80s songs to run to (specifically by starting with Call Me and then hitting Shuffle). They may not be the ‘coolest’ songs of the era – and they don’t include ’80s songs which I came to appreciate years later – but they are the songs which, as a kid, I loved in my belly. Songs which I sang my heart out to, songs which I danced to, songs which made me feel pure, unashamed joy and happiness in my little soul.

Because it’s a running playlist, I haven’t included ballads which I loved back then (notable omissions include Sheena Easton’s For Your Eyes Only, Gloria Estefan’s Can’t Stay Away From You, and, yes, Starmaker by The Kids From Fame), although I’m letting No More Lonely Nights in, because while Paul McCartney deems it so much a ballad that its official title is No More Lonely Nights (Ballad), I’m not so sure. Nor does it feature other music which I grew to know and love in the ’80s but which wasn’t from that decade (chiefly: Bruce Springsteen and Paul Simon’s back catalogues). It’s ’80s, pure and simple – from A-ha to Will Powers.

If you’re an ’80s child who goes running too, I hope you like it. And whether you are or you aren’t, I recommend making a playlist of songs you loved in your belly as a kid – for whatever occasion, or perhaps no occasion at all.

So, here it is. And yes, it does include Chariots Of Fire.